You are here: Home / Legislature / Reaction to restraining order split 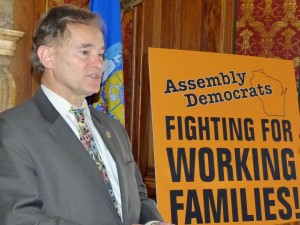 A Dane County Judge’s decision Friday to grant a restraining order blocking enactment of the budget repair bill is drawing mixed reactions from both sides of the political aisle.

Sumi’s order prohibits the Secretary of State from publishing the law until otherwise directed by the court. The action essentially keeps the provisions of the bill from being enacted, including changes to the collective bargaining rights of public employees.

Republicans quickly attacked the decision, with Attorney General J.B. Van Hollen issuing a statement that the Department of Justice will appeal the ruling as quickly as possible. Van Hollen says “The Legislature and the Governor, not a single Dane County Circuit Court Judge, are responsible for the enactment of laws.”

Assistant Attorney General Steven Means indicated after the court hearing that the Department would be looking at an appeal.

Republican leaders in the Legislature issued a joint statement. In it, Senate Majority Leader Scott Fitzgerald (R-Juneau) and Assembly Speaker Jeff Fitzgerald (R-Beaver Dam) said “Dane County always seems to play by its own rules, but this morning we saw a Dane County judge try to re-write the constitutional separation of powers.”

The statement offered no indication on whether the Legislature would come back and take another vote on the bill, which Sumi indicated they have the power to do.

Meanwhile, Democrats largely praised the ruling. Secretary of State Doug La Follette, who is named in the lawsuit filed by Dane County District Attorney Ismael Ozzane, says the restraining order backs up his decision to hold off on publishing the bill while legal challenges were pending. La Follette has said he would wait as long as legally possible to publish the bill, which would have been on March 25th.

Assembly Minority Leader Peter Barca (D-Kenosha) says it was a big victory for Democracy in Wisconsin, and affirms the rights of people to be notified about government meetings.

Barca also called on Republicans to see the ruling as a sign that they should work with the Minority and try to craft a budget repair bill that closes the deficit in the current state budget.

Governor Scott Walker’s office also issued a statement Friday, saying the Governor is “confident the provisions of the budget repair bill will become law in the near future.”