You are here: Home / Badgers / Badgers eye a night game against Nebraska 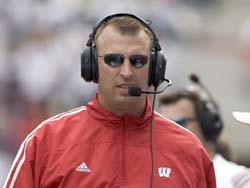 The historic game could be headed for a night-time kickoff.

AUDIO: Bret Bielema on the possibility of a night game vs. Nebraska :11

Wisconsin also opens the season with a night game, Sept. 1 against visiting UNLV.