You are here: Home / Legislature / Hopper recall a rematch 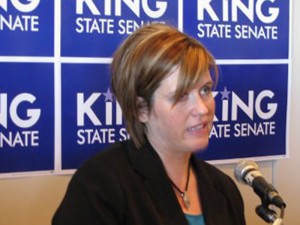 Jessica King plans to run against Sen. Randy Hopper in a recall election.

Republican state Senator Randy Hopper will go up against a familiar opponent in an expected recall election. Oshkosh Deputy Mayor Jessica King announced Wednesday she will run against the Fond du Lac Senator, in an election that could take place later this summer.

King last faced Hopper in a close 2008 campaign for the seat he currently holds. The race then resulted in a recount.

The Democrat says the candidates are about as opposite as two people can be. King says thousands in the district have shown in recent weeks that they believe Hopper went to Madison and “forgot who he was representing.”

Hopper is one of eight Republican Senators targeted by recall efforts across the state because of their support for the Governor’s budget repair bill and the changes it made to the collective bargaining rights of public workers. Recall campaigns have also been launched against eight Democratic Senators, after they left the state to block a vote on the bill.

The state’s Government Accountability Board is still verifying the signatures collected for the Hopper recall petition. An election is expected though, after organizers turned in over 24,000 signatures. The number submitted was nearly 8,000 more than what was needed to trigger a recall.