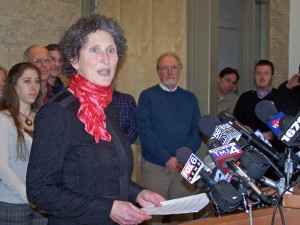 The state Supreme Court race is headed for a recount in all 72 Wisconsin counties. Just hours before the deadline on Wednesday, Assistant Attorney General JoAnne Kloppenburg filed a petition with the Government Accountability Board making the request.

The GAB says the recount, which will be done at taxpayer expense, could begin as early as next week.

Statewide vote totals give incumbent Justice David Prosser about a 7,300 vote lead in the election held earlier this month. However, Kloppenburg says reports of voting anomalies across the state convinced her that a statewide recount is needed. She says the effort is needed to give Wisconsin voters full confidence the results are legitimate and the election was fair.

Kloppenburg is also asking for a full investigation in Waukesha County, where 14,000 votes from the City of Brookfield went unreported by the County Clerk for nearly two days. The revelation swung the race in Prosser’s favor.

Kloppenburg says a special independent investigator should be appointed to look at communications in the county, why the numbers were not corrected right away, and why several conservative bloggers and talk show hosts knew about the mistake before it was made public.

The Government Accountability Board did conduct its own review in Waukesha County, but found no evidence of foul play.

Prosser’s campaign has indicated it will challenge any request for a recount, calling the move a waste of taxpayers hard-earned money.  Kloppenburg says the law is on her side and the Prosser campaign’s threats will not thwart the exercise of her rights.