You are here: Home / Packers / NFL Draft kicks off tonight

The 2011 NFL Draft kicks off tonight at 7pm.  The Green Bay Packers, after 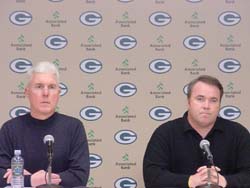 winning the Super Bowl last season, get the 32nd and final pick in the first round as a result.

The Green Bay Packers are a team that has no immediate pressing needs, but that doesn’t mean they won’t use the draft process to look for a starter or two, as well as improve the depth on their roster.

General Manager Ted Thompson would love to add some pass rush depth at outside linebacker, opposite Clay Matthews.  Thompson would love to add the left tackle of the future if a player like Mississippi State’s Derek Sherrod would fall into range.  Defensive end is another possibility for the Packers, who are looking to replace Cullen Jenkins.  Clemson’s Da’Quan Bowers would be a player the Packers would covet there.

Of the players that I’ve mentioned, they will likely require the Packers to trade up to get into draft position.  The Packers have 9-picks going in, including a pair of 4th round picks, so they would have some extra selections to work with.

Ted Thompson has traded up in the last three drafts.  This year, he could go up, he could stay at 32 and pick a player or he could trade out of the first round altogether.

There’s also a possibility that Alabama running back Mark Ingram could drop down the draft board and be available to the Packers.  It’s not a position of strong need for the Packers at the moment, but starter Ryan Grant is entering the final year of his contract.

For the fans, trading out of the first round wouldn’t be a popular decision.  They’ll be gathered at draft parties with great anticipation.  If Ted Thompson trades out of the first round, it’ll certainly disrupt the party.  Of course Thompson can’t be and won’t be thinking about the fans if he were to make such a move.  Thompson has the Packers best interests to think about.  The fans will have to understand.