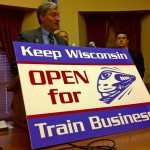 Months after Governor Scott Walker rejected $810 million in federal money for a high speed rail line between Milwaukee and Madison, advocates point to a new study as reason to keep pushing for it. The study claims expanding passenger rail service in Wisconsin and the Midwest would create 103,000 jobs and spur nearly $14 billion in economic activity. Madison Democrat, Representative Brett Hulsey, said it’s a question of competitiveness. “The Midwest and Wisconsin is the fifth largest economic region of the world. We’re competing with Japan, China, France and Germany — all countries that have an updated 21st Century high speed transportation system,” he said.

Projected costs on a 150 mile an hour, Chicago to Twin Cities route are $25.7 billion. Steve Hiniker is executive director of 1000 Friends of Wisconsin. “Transportation projects are expensive, no matter how you look at it. You need to look at these systems over the life of the investment,” said Hiniker. “Yes, it’s a large dollar amount that we’re talking about, but if you look back at the interstate system, what would we be like if we had not invested in that?” The report was prepared for the Chicago-based Midwest High Speed Rail Association, with sponsorship from Siemens, a German firm which among other things produces railway vehicles.

“We’ve seen gas already top $4.00 a gallon, and it’s not even Memorial Day,” said Shahla Werner, Director of the Sierra Club John Muir Chapter. “We seriously hope that Governor Walker will reconsider his position and look at this study carefully.” Hiniker said rail has been a victim of partisanship. “Tommy Thompson, a Republican governor, conservative that ran the state for 16 years, was for rail,” said Hiniker. “It’s when it was turned into a wedge issue that we ran into these problems. It’s time for leadership. It’s time for the governor and the legislature to provide some leadership instead of the intense partisan divide.”