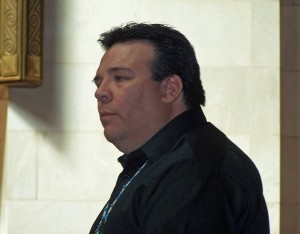 There was an environmental focus to this year’s State of the Tribes address. Bad River tribal chair Michael Wiggins Junior delivered the annual address, and struck a conciliatory tone in his remarks to the legislature and state officials. “We are committed to communication, meeting the unmet needs of our people, and caring for the environment,” said Wiggins, who delivered the seventh annual address on behalf of Wisconsin’s eleven federally recognized tribes. “Governor Walker’s pledge to create 250,000 jobs for the state of Wisconsin, the tribes echo the need to create more jobs.” Wiggens noted that the Bad River Reservation on the shores of Lake Superior is about as far north as one can get in Wisconsin’ joking that Minoqua and Woodruff are referred to as “down south” and Wausau as “way down there.” 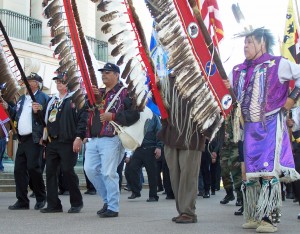 Gogebic Taconite has proposed the mine in Ashland and Iron counties. The plan would have to pass a permitting process, and Wiggins said the tribes will expect to be included in any discussions about the project, which could bring thousands of jobs to an economically disadvantaged area of the state. But Wiggins raised concerns over the proposed open pit mine during his address. Later he spoke with reporters. “When I look at the potential impacts, and I would say the potential catastrophic impacts, to our surface and groundwaters, there’s definitely some heightened concern,” said Wiggins. “I’m dead against mining” said Lac du Flambeau tribal chairman Tom Maulson. “I don’t believe that mining is going to be the best interest for the state of Wisconsin. Jim Crawford is vice-chair of the Potawatomi tribe, which successfully fought a mine near Crandon. “Everybody wants the same thing,” said Crawford. “We want jobs for our people. We want economic benefits, health care. At what cost are we willing to pay to have those things?”

State Senator Bob Jauch represents Bad River and surrounding areas in the legislature. “We are a long way from knowing whether or not they’re going to apply for permits to do mining,” he said. Gogebic Taconite has proposed the mine in Ashland and Iron counties. The project has the potential to create several thousand jobs in an economically disadvantaged area of northern Wisconsin.