You are here: Home / Weather / Tornado confirmed in Merrill 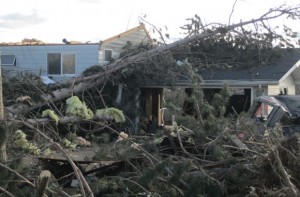 The National Weather Service confirmed on Monday what many in Merrill already knew – that a tornado ripped through the northern part of the city on Sunday night.

The Weather Service said the twister spun through a 22-mile path from a mile north of Hamburg in Marathon County to Gleason in Lincoln County. A survey team was still trying to figure out the exact strength of the twister though they estimated it as an EF-2 or EF-3, meaning it had three-second wind gusts of 111 to 165 miles per hour.

The tornado was one of at least seven confirmed by the Weather Service’s Green Bay office. The government agency confirmed other tornadoes in Kaukana, West Bloomfield, and in Forest County. Ten twisters in total were confirmed in the state.

In Hamburg, the tornado damaged a house, shed and barns on either side of Highway FF.

“This is clearly at the top of the list in terms of devastation,” Governor Scott Walker said as he toured the damage in Merrill on Monday afternoon.

Joined by his wife, the adjutant general, and the state emergency management administrator, Walker listened as residents described the tornado roaring through their neighborhood. Congressman Sean Duffy (R-Ashland) and state Rep. Tom Tiffany (R-Hazelhurst) also participated in the damage assessment.

The storm destroyed seven businesses in Merrill’s industrial park, according to the state emergency operations center. Twenty to 25 homes in Merrill were destroyed or suffered major damage. Twenty-five to 50 other homes suffered minor damage. No insurance information was immediately available on the properties.

Damage assessment teams will continue looking over the damage Tuesday as they prepare reports that could lead to a possible disaster declaration. The damage has to meet a certain threshold to qualify for state or federal aid, said Wisconsin Emergency Management administrator Mike Hinman. He said most of the homes were covered by insurance though state aid may still be necessary.

Three people in Lincoln County, including one who was videotaping the tornado, suffered serious injuries and had to be flown to hospitals for treatment. There were no deaths in the county reported so far, state officials said.

“We’ll figure a way to make this work,” said Mike Handlin as he stood outside his home on Balsam Boulevard. Recliner chairs and other personal belongings that he, his wife and their two children had accumulated over the last seven years lay strewn about their front yard. The walls of his home had blown away, exposing the split level property; all that remained were some interior walls, a chimney and the stairs leading to both floors.

Handlin was at church with his family when the tornado hit. He and his wife Lisa dropped their children off at a relative’s house then crawled back to their own home. One miracle among many, Handlin said, was eventually finding their family dog Nugs.

The scene in the neighborhood on Merrill’s north side is indescribable, with some trees still standing upright with their branches shaved right off. Other trees rested in a crumpled pile. Pink and yellow fluffy insulation hung from tree branches like cotton candy; a child’s playground slide rested under a mangled pile of tree trunks; tattered knit sweaters fluttered in the branches.

Neighbors spent the day clearing their homes of any salvageable possessions, loading them in pickup trucks and trailers. Men using chainsaws began cutting away at the woodpiles. Volunteers bearing barbecue sandwiches, hot dogs, fruit, snacks and drinks walked the streets offering food to replenish the weary residents. No one asked what to do – all just pitched in with a resolve to help.