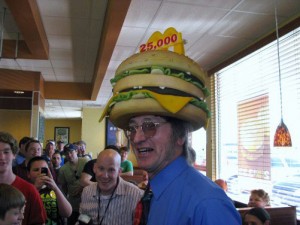 Hundreds gathered at a McDonald’s Restaurant in Fond du Lac Tuesday to watch Don Gorske eat his 25,000th Big Mac. The devotion to the McDonald’s sandwich began in 1972, when Gorske went to McDonald’s and ended up having nine Big Macs on that first day. Since then, he’s only gone nine days without one.

No one was aware of the mounting “Macs” until math teacher Tom Strauss told him he should be telling people about the feat. Gorske was afraid people would think he was crazy, but was convinced some might be impressed.

Strauss totaled up just how much “two all-beef patties, special sauce, lettuce, cheese, pickles, onions, on a sesame seed bun” Gorske has eaten over the last 39 years. It’s about 20 head of cattle, 125 gallons of special sauce, 1,500 heads of lettuce, 800 pounds of cheese, 2,000 pickles, 1,100 onions, and over eight million sesame seeds.

Gorske says he did recently receive a clean bill of health, including normal cholesterol levels.

McDonald’s Chuck Kuen read a resolution from the restaurant chain proclaiming it “Don Gorske Day” in Fond du Lac and at McDonald’s restaurants in the Fox Cities. The 25,000th Big Mac was literally delivered on a silver tray at the same McDonald’s where Gorske ate his first one.