You are here: Home / Sports / A windy day for a Marathon

With winds gusting to 41 miles per hour, Sunday was a tough day on roughly 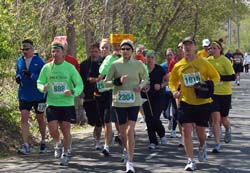 8,000 runners that took part in the Cellcom Green Bay Marathon.

Kenyan native Peter Omae Ayieni won the men’s Marathon in 2 hours, 26 minutes, 16 seconds.  But because of high winds, Ayieni’s time was far off the course record of 2:15:15 set last year by James Boit.

Boit, who is also a Kenyan native, finished second with a time of 2:27:42 on Sunday.

Howery took home $3,000 for first place, but failed to qualify for the U.S. Olympic Marathon Trials in January.  She missed the qualifying time by 1 minute and 12 seconds.