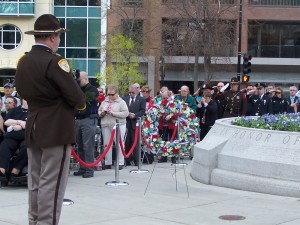 Law enforcement on Friday honored officers killed in the line of duty.

Members of law enforcement from across the state gathered at the Capitol Friday to honor officers killed in the line of duty. Two names were added this year to the Law Enforcement Memorial, located on the State Capitol grounds in Madison.

Retired Vilas County Sheriff John Neibuhr says losing an officer is one of the hardest things for a department to deal with. He says adding names to the memorial is a somber occasion, but also allows officers and families to reflect and recognize those who died serving the public.

Governor Scott Walker offered his thanks to officers for putting their lives on the line every day, saying the rest of the state can sleep better because of their sacrifices.

Fond du Lac Police Officer Craig Birkholz, who was shot and killed in the line of duty earlier this year, was also honored during the ceremony. His name will likely be added to the memorial next year.