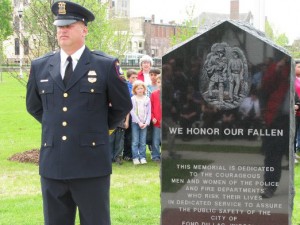 Just two months after Fond du Lac police lost one of their own, officers and the community gathered to remember all of those killed in the line of duty. During the city’s annual police memorial ceremony, the name of Officer Craig Birkholz was added Thursday to a monument for fallen officers that’s located just blocks away from where he was killed.

Birkholz was shot in March during an armed standoff with a suspect in a sexual assault complaint. Another officer and a police dog were also shot, but have since recovered.

Birkholz’s brother Paul thanked the department for becoming an extended family through the tragedy, sharing in their grief and happiness. Those same wishes were extended to police in Kenosha, where Birkholz was buried. He hugged FDL Police Chief Tony Barthuly before leaving the podium.

Chief Barthuly said he was very impressed with Officer Birkholz, but even more so when he learned about his heroic attempts that day. He says Birkholz was killed living his dream and recalled him as being a “wonderful young man.”

Fond du Lac has lost three police officers in the line of duty over the years; William Prinslow, Nick Klaske and Officer Birkholz.