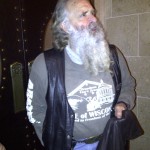 Former State Senator Dave Zien is back home in Wisconsin, after suffering serious injuries in a motorcycle crash in Florida. Speaking from his home near Chippewa Falls, Zien said members of the Christian Motorcycle Association helped get him back home from Talahassee last week, but with his injuries, it was a rough trip. “The trip was absolutely excruciating,” said Zien, who represented the 23rd state Senate district for more than ten years, ending in 2007. “We had to stop very 200 miles. It was torturous for me, with my spleen and my stub and my smashed right hip.” The veteran and avid motorcyclist suffered the injuries, including loss of his left leg above the knee, in a March 13 accident.

Zien said they were delayed several hours getting on the road last Wednesday, but that turned out to be a blessing, as their path would have led them directly into Alabama’s deadly tornadoes. “Had we left on time, we’d have been in that storm,” said Zien. Zien said prayers and cards from around the country have helped him through his difficult recovery.