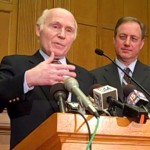 Putting an end to speculation about his future plans, Senator Herb Kohl is retiring. Kohl made the announcement during a press conference in Milwaukee on Friday morning. “I have decided that the time has come to give someone else the opportunity to serve,” said Kohl. The 76 year-old Democrat from Milwaukee was elected to the U.S. Senate in 1988, and was reelected to a fourth, six-year term in 2006. His current term ends January 3, 2013. “I will continue to devote all my energy and time in the next 19 months to see to it that the people of our state are well served.” In addition to being a Senator, Kohl owns the Milwaukee Bucks NBA franchise. His family founded the Kohls grocery and department stores.