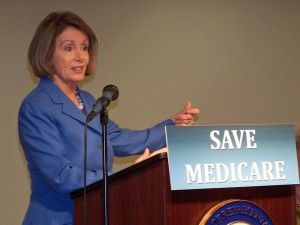 The top Democrat in the U.S. House of Representatives was in Waunakee Thursday, as part of a national push to save Medicare from proposed cuts. House Minority Leader Nancy Pelosi (D-CA) met with senior citizens to discuss Democrats’ efforts to protect the program.

The California Democrat says “with the swing of a gavel” Republicans passed a budget that abolishes Medicare as we know it today. She says that cannot be allowed to happen.

Pelosi’s visit was at the invitation of Congresswoman Tammy Baldwin (D-WI). Baldwin says Medicare is a promise that, if you work hard and play by the rules, medical care will be available in your senior years. She says the GOP plan would cut benefits and force seniors to buy insurance on their own.

The cuts proposed by Republicans, championed by Congressman Paul Ryan (R-WI), are aimed at reducing the federal deficit. Pelosi says Medicare is not the right place to get that money. She suggests ending tax breaks for oil companies as an alternative to paying down the federal debt, arguing it could save $32 billion over the next decade.

Also during the stop, Rep. Baldwin addressed questions about a possible run for the U.S. Senate in 2012, following Senator Herb Kohl’s recent announcement he will retire next year. Baldwin says it’s something she making a “serious evaluation” of, but a decision has not been made.

Baldwin has been mentioned as one of several possible Democratic candidates to run for Kohl’s seat. Others include fellow U.S. Representative Ron Kind (D-WI) and former Senator Russ Feingold.