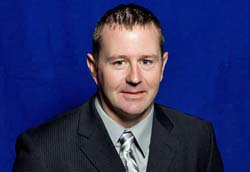 announced the hiring of Chris Brooks, replacing Wil Nichol, who resigned to accept a front office position in the NHL.