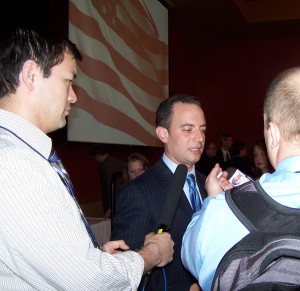 Wisconsin will see a US Senate seat open up in 2012 as Herb Kohl (D-Wisconsin) is not running for another term, leading to predictions as to who are viable candidates. Freshman US Senator Ron Johnson (R-Wisconsin) was asked by reporters whether voters would like to see a political newcomer such as himself, or an experience elected official.

“I don’t think there’s a perfect profile,” he replied. The lawmaker from Oshkosh added he would prefer someone who was “doing it because he loves this country and is dedicated to fixing the problem, as opposed to someone who just wants to be a US Senator.”

Johnson met with media at the state GOP convention this weekend where he told delegates to support the six Republican state Senators facing recall elections and focus on defeating the three Democrats up for recall.

As far as solid Presidential candidates, Johnson would like to see the primary process run its course and it’s way too early to start “naming names.”

RNC Chairman Reince Preibus was asked whether businessman Herman Cain is a legitimate Presidential candidate for the Republican Party. Preibus said, “Yes he’s a legitimate candidate. He’s going to run for President and he’ll probably do a pretty good job but I’m not in the business of singling out individual issues with these candidates.”

As far as Tommy Thompson running for US Senate, Preibus called Thompson, “one of the greatest governors we’ve had in the state of Wisconsin. “ As RNC Chair, the Kenosha native will not endorse anyone during a primary process.