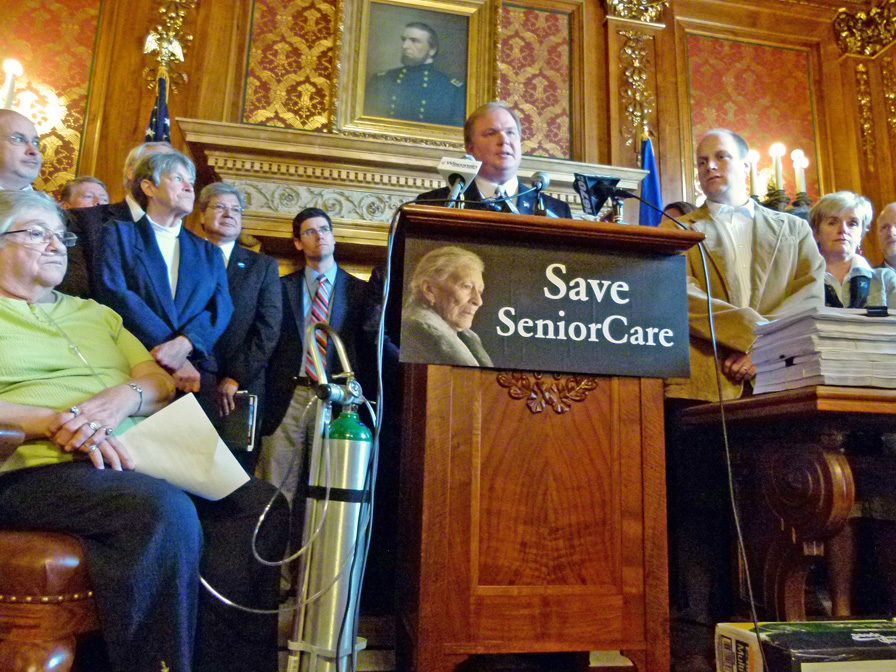 Assembly Speaker Jeff Fitzgerald (R-Horicon) says he’ll work to save the popular, low-cost prescription drug program for Wisconsin senior citizens. This impromptu announcement comes shortly after more than 14,400 signatures on petitions in support of SeniorCare were delivered to his office.

State Representative Andy Jorgensen (D-Fort Atkinson) launched the Save SeniorCare campaign five weeks ago. “We’ve made a motion on Joint Finance; Senator Carpenter and I have introduced a bill; we’re delivering letters and clear messages along with these petitions to Governor Walker, Speaker Fitzgerald and Majority Leader Fitzgerald.”

Speaker Fitzgerald says “Assembly Republicans created SeniorCare years ago and (they) are committed to keeping it … as is.” GOP lawmakers have not agreed with Governor Scott Walker’s plans to winnow down SeniorCare, forcing many folks to sign up for Medicare Part D.

Jorgensen says he’s happy to work with his colleagues across the aisle; it’s about doing what’s right for senior citizens and for taxpayers. “Governor Walker’s budget plan would force Wisconsin seniors to enroll in Medicare Part D, a program that costs participants hundreds — if not thousands — of dollars more each year.”

Fitzgerald tells reporters that Republicans, who control the legislature, “thought it was vital to protect SeniorCare.” Jorgensen says he’s “cautiously optimistic” to hear the speaker’s response. He says it’s important that the program continues with its current eligibility levels and benefits. “Anything less is unacceptable.”

No word on when the legislative budget writing committee will take up the issue.