You are here: Home / News / Tough budget times for transit 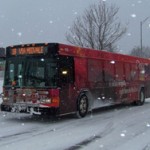 Wisconsin’s local transit systems face uncertainty as a result of provisions contained in Governor Scott Walker’s proposed biennial budget. With the budget-writing Joint Finance Committee to consider transportation issues this week, Craig Thompson with the Transportation Development Association hopes they’ll reconsider what’s in the governor’s budget. “The moving of transit from the transportation fund to the general fund doesn’t in and of itself necessarily impact the programs monetarily, but also in that proposal there is a ten percent reduction to transit aids, which obviously would have serious impact on transit systems across the state,” said Thompson.

“We would hope that the co-chairs would have exactly the opposite view,” Thompson explained. “We would recommend that they change the funding source for transit, but hope that they would stick with the governor’s proposal to use sales tax revenue for vehicles to help fund the transportation program.”

Senator Alberta Darling has indicated opposition to that, but she and Representative Robin Vos are both in favor of removing bus service from the transportation budget, instead having transit paid for with general taxes. Thompson noted that bus service in Milwaukee and the Fox Valley is already under pressure, and the changes in the budget could mean further service cuts at a time when more people may be relying on the bus to get around. “With gas prices around $4.00 now, the demand nationally for transit has been going up,” Thompson said. “Hopefully the busses will still be there, and the routes will still be there, to get people where they need to go.”