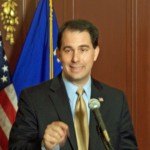 Governor Scott Walker has signed legislation requiring photo ID at Wisconsin polling places. Something to consider as the new photo ID requirement takes effect: Walker cited numbers he obtained from the DOT and Government Accountability Board. “As of right now there are just under four and a half-million state issued drives licenses or state issued ID cards,” said the governor. “You know how many registered voters there are in the state of Wisconsin? Just under three and a half-million.”

Walker restated a familiar theme from the years long debate over the issue. “Getting cold medicine requires a photo ID, checking out a library book in many of our public libraries, doing just about everything in life requires that,” the governor said. “Doesn’t it make sense for something that’s much more important than cold medicine or a library book.” The governor also said polls have shown consistently that state residents, Democrats, Republicans and independents, are in favor of a photo ID requirement. The bill received only one Democratic vote in the Assembly, and none in the Senate.