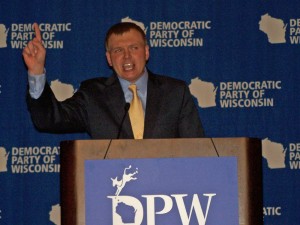 Earlier this year, Democratic Party of Wisconsin Chairman Mike Tate says the fight against the Republican agenda was in the hallways and streets around the Capitol. Now, he says that fight is moving to Senate districts around the state.

Tate helped open the Party’s annual convention Friday night in Milwaukee by calling on delegates to help in whatever ways they can to recall six GOP Senators from office later this summer, and to defend the three Democratic Senators who have recall elections expected against them as well.

Tate says the annual convention could have been a time for Democrats to “lick their wounds” after heavy losses last November. Instead, he says the event will help to energize the party to go out and retake a majority in the Senate.

After that, he says the party will focus on recalling Governor Scott Walker, keeping U.S. Senator Herb Kohl’s seat in Democratic hands, and helping President Obama win Wisconsin again in 2012.