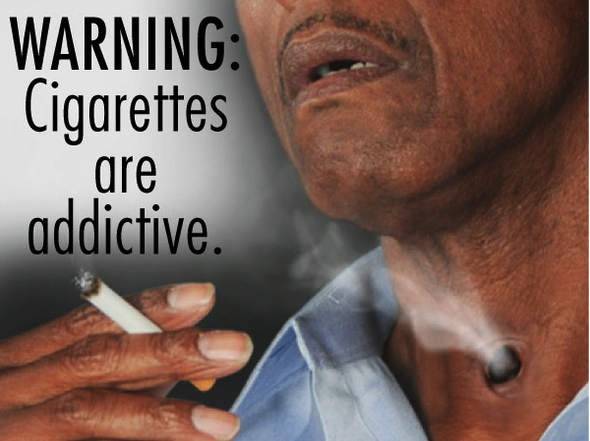 One of several new warning labels for cigarettes (PHOTO: FDA)

Cigarette labels have not been updated in the US for more than 25 years. Dr. Michael Fiore is the director of the University of Wisconsin Center for Tobacco Research and Intervention. He says the new graphic warnings will send a clear message to smokers about debilitating and fatal diseases caused by tobacco use.

“Tobacco use is not just a bad habit, but it can directly cause heart attacks, cancers, damage to people around us. But even as important as these warnings, it also gives smokers somewhere to turn.” On every warning label will be a number for smokers seeking help quitting.

The new, mandatory warning labels were announced Tuesday by the (FDA) Food and Drug Administration, replacing the current small and easy-to-miss warning. Dr. Fiore says the upgrade is impossible to overlook. “The new graphic warnings will be color photographs primarily; they’ll take up fully 50 percent of the cigarette pack … and it’ll tell in very graphic terms that tobacco use kills.”

Fiore says most smokers with whom he speaks are sick of their addiction, the cost, the negative health effects, and the odor. But, are the new eye-catching labels over the top? He says probably not to the child who lost his parent to the drug, or the woman who lost her husband from tobacco use. He says it’s more than just a bad habit; tobacco use kills 8,000 people in Wisconsin every year.