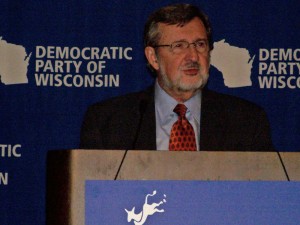 In a speech at the Democratic Party of Wisconsin’s convention in Milwaukee Friday night, retired Wisconsin Congressman Dave Obey offered some stiff criticism for U.S. House Republicans and one his former colleagues.

The former Seventh District Congressman took several shots at US Representative Paul Ryan’s (R-WI) budget plan, which was adopted earlier this year by House Republicans. Obey joked Ryan is leading the effort to “repeal the 20th Century” with a budget plan he described as radical. Obey criticized the plan for cutting financial aid to college students, along with shredding Medicare and Medicaid.

The longtime Democratic Congressman says Republicans describe the proposal as saving the government money. However, he says that analysis fails to account for the fact that cutting back safety nets such as Medicare and Medicaid would take a serious toll on American citizens.

Obey says many seniors rely on Medicare because private insurance companies don’t want to take them on. He says they just are not profitable for private insurers, but that’s not a good enough reason for the government to abandon efforts to provide them with care.

Obey says Medicaid programs, such as BadgerCare in Wisconsin, are crucial for middle class families trying to make ends meet during tough times.

Obey says something has happened to the Republican Party in the last few years, at both the national and state level. He singled out Wisconsin Senate Republicans facing recall elections this summer, who claim they are moderates. However, Obey says they failed that test when they voted for Governor Scott Walker’s collective bargaining bill, and that’s “why they’ve got to go.”