You are here: Home / Politics / Govt / Restoration at the Capitol 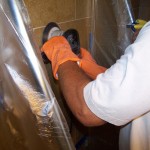 Some damage at the Capitol requires expert care. A couple of spots on the interior limestone of the state Capitol have been buffed out and refinished after being defaced during the budget unrest. Ron Blair, a building manager with the state Department of Administration, pointed out an already repaired area of interior wall. “This is where they put some vulgarities about the governor or someone else,” he said of the spot which was defaced back in February. “Within a half an hour, somebody from one of the organizations cleaned it themselves.” But the cleaner used, likely vinegar or something containing vinegar, etched the limestone.

Mike Fridly, a mason working for the state, was restoring a surface outside the Capitol press room which was defaced a couple of weeks ago. “We’re sanding it down, getting it smoother and then buffing it back out to the original finish,” he explained. DOA’s Blair said improper cleaning necessitated the restoration – and whoever tried to do the job on their own would have been better off letting the experts handle it. Two spots, both on the second floor, required refinishing. While many signs were posted in the Capitol, Blair said the tape used to affix them caused little problem to remove – when the job was done properly.