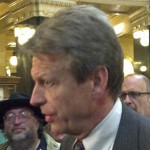 Attorney Kurt Kobelt is general counsel for the teachers union WEAC. Kobelt said they’ll seek an injunction based on two arguments: a violation of the equal protection clause. “In that there’s no rational basis for distinguishing between the public safety workers, namely the police and firefighters and the rest of the workers,” he explained.

The second claim is that the law violates the First Amendment. “Taking away the payroll deduction for dues for the non public safety workers violates their right to contribute to their unions, and to further political activities that they desire to engage in.”

Kobelt said the unions waited for the state Supreme Court to rule before seeking relief in federal court. They’ll seek a preliminary injunction that would stop the law from going into effect by June 29th, although DOA Secretary Mike Huebsch said it’s already law.