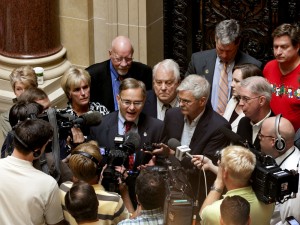 The state Senate has adjourned its session until next week, leaving a bill that extends federal unemployment insurance benefits for another 13 weeks in legislative limbo. At issue is an amendment from the Assembly that restores a one-week delay in the start of benefits. The Senate had voted to repeal the delay in its version, which Democrats argue provides help for the newly unemployed at a time when it’s needed the most.

Senate Democratic Leader Mark Miller (D-Monona) on Thursday accused Republicans of playing political games with the unemployed and called on leadership to “step up” and help families with mortgages to pay and children to feed.

Republicans argue the delay could save the state up to $51 million a year and does not impact the overall long-term benefits the unemployed can receive. Miller says it takes money away from those who have just lost their jobs and still have bills to pay.

In a statement, Senate Republican Leader Scott Fitzgerald (R-Juneau) questioned whether Democrats would support the Assembly version of the bill if the Senate came in to take a vote. Miller would only say his members will have to “confront whatever comes before us.”