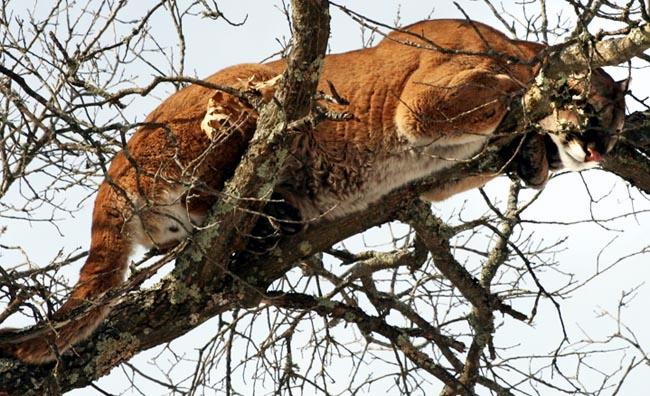 A cougar confirmed to have visited Wisconsin last year is dead.

What’s most surprising to wildlife officials is the distance the animal traveled, so says wildlife biologist Adrian Wydeven of the Wisconsin Department of Natural Resources. The cougar was killed by a motor vehicle six weeks ago in Connecticut — that’s 1055 miles away from its first recorded sighting in Champlin, Minnesota on December 5th, 2009. “Yeah, this represents probably new records of movement for a cougar.”

Wydeven says, considering the young male cougar probably originated in the Black Hills of South Dakota, and had to get around the Great Lakes, it’s more likely the animal traveled 1,600 miles. He says previously, the record distance traveled by a mountain lion was 663 miles — from the Black Hills to Oklahoma in 2004.

This was the first confirmed sighting of a cougar in Connecticut in modern times. Based on tracks, a scat sample, and other evidence, Wydeven says experts confirmed that this cat was, in fact, the same one tracked in St. Croix and Dunn Counties. “Initially the officials there thought it was just some escaped zoo animal and after doing some DNA testing on it found out it was the same individual that had traveled through Wisconsin.”

A necropsy revealed that the cougar was in near perfect condition before it was struck by the car. There’s plenty of food available in Wisconsin, so it’s likely the animal traveled the great distance in search of companionship.

As for other big cougars in the Badger State, Wydeven says the most recent highly probably sighting was in May 2010 in Lena in Oconto County (in northeast Wisconsin).