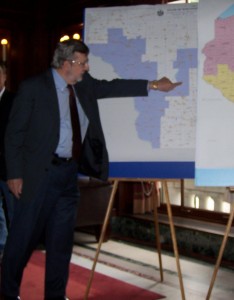 At a morning press conference, Obey said each Congressional District is supposed to be about 710,873 people under the census. He said a “small adjustment” could be made to be in compliance but the GOP plan “unnecessarily disrupts” hundreds of thousands of additional residents.

State Senate Minority Leader Mark Miller said people in Kenosha County – except city of Kenosha residents – would be disenfranchised. He claimed county residents have not cast a ballot for a state Senate race since 2008 and under the proposed map would not do so again until 2014.

Obey said the GOP map would make it harder for challengers his former district. Obey said traditionally a 7th Congressional District candidate spends money on ads in Wausau, Duluth, EauClaire markets. But with Republicans wanting to extend the 7th CD to include St. Croix County, a challenger would need to buy airtime in LaCrosse and Twin Cities markets, a pricy option.

Wisconsin’s last three redistricting plans, occurring after each census, were decided in the courts because of divided majorities in the legislature. Now Republicans hold majorities in each chamber.

A public hearing on the proposed map is being held today.