You are here: Home / Weather / Storm victims still without power 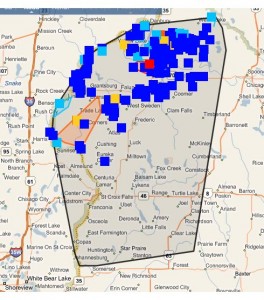 Clean up continues in Burnett County following the Friday storm that went through the Grantsburg and Siren area with winds up to 80-miles-an-hour. Joan O’Fallun, Polk-Burnett Electric Co-op Public Relations Manager, says crews from around the state have been working to restore power.

At the peak of the storm Friday night, 6,000 customers were without power. As of 10:45 AM Tuesday there were 1754 people still without service.

The rebuilding of lines is expected to take most of the week.

Meanwhile county authorities have identified the 11-year-old girl who died after a large oak tree fell on her. Mackenzie Klar of Hinckley Minnesota was crushed by a fallen tree that was struck by lightning. Also, officials say 51-year-old Kerry Richter of Webster died from a heart attack while cutting wood and storm debris.

In neighboring Douglas County, there was at least one confirmed tornado near Solon Springs on Friday night.  Straight-line winds of 100-miles-an-hour destroyed a number of homes.