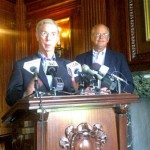 There’s a move afoot to end state Supreme Court elections. Public financing of state Supreme Court races has had its funding cut, and state Senator Dale Schultz doesn’t think it’s a realistic response to a partisan court and divisive elections. “I’m of the opinion that no matter how much money we put into a campaign finance system, we are not going to ever be able to out spend the special interests, the third party money, coming in from who knows where,” said Schultz. The Richland Center Republican and Janesville Democrat, Senator Tim Cullen, are proposing a constitutional amendment for merit selection of justices. “I believe the process has been taken away from the voters already,” said Cullen. “These campaigns are not funded by the average citizens of Wisconsin giving 25 bucks, or 50 bucks or a 100 dollars to the candidates. It’s way past them.”

Wisconsin is among a minority of states that elects supreme court justices rather than appointing them. The amendment from Schultz and Cullen would need to be passed by two consecutive sessions of the legislature before going to a statewide vote. They’d like this legislature to consider it. Mike McCabe with the Wisconsin Democracy Campaign, a Madison-based government watchdog group, rejects the idea. “Legislators just got done eviscerating the Impartial Justice Act, doing away with all public financing of Supreme Court Elections, totally turning those elections over to private special interests,” said McCabe. “The problem isn’t that we’ve had Supreme Court elections for the past century and a-half. The problem is that those elections have been turned into auctions. We’ve got to do something about that.”

At his press conference Friday with Cullen, Schultz said voters deserve a chance to consider whether they’re satisfied with the status quo or want a change. He also said he was heartened to hear Governor Scott Walker suggest this week, during a meeting with the Milwaukee Journal Sentinel, that it may be time to look at a different process. “I think people are beginning to wonder whether or nor it’s time for a change,” said Schultz.