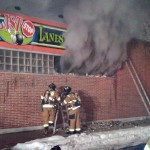 A former Fond du Lac man suspected of burning down a city landmark in March of last year has reached a plea agreement with the Fond du Lac County District Attorney’s office. Lyle Huss of Kimberly entered a guilty plea to an arson charge Tuesday. Fourteen other charges were read into the record and dismissed. The 47 year-old Huss owned the Last Stop Bar and Lanes at the time of the fire. “I’m glad that Mr. Huss took responsibility for what he did,” said District Attorney Dan Kaminsky. “It was a very serious crime. It affected a lot of people.”

A presentence investigation was ordered and Huss will be sentenced October 19th. The 93-year-old building had a long history in the community. “It’s been a rough patch for that neighborhood,” said Kaminsky. “It’s been a lot of emotional turmoil and difficult times to get through.” Huss’s ex-girlfriend, Lynda Stiller-Devoe of Sheboygan, reached a deferred prosecution agreement in September of last year for her role in the fire. She was placed on probation for two years and charges against her will be dismissed if she commits no criminal acts during that time.