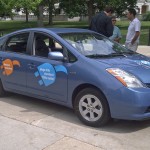 An event at the Capitol this week promoted green transportation options, such as hybrid and electric vehicles, and bicycling. Dr. Jonathan Patz is a UW professor, and he said options such as cleaner cars and bicycling can offer public health benefits. “We’re actually conducting studies showing that we would save billions of dollars in health care costs if we were take some of the dirty fuel vehicles off the highway, and also if we were to get on a bicycle when we can,” said Patz. “One third of greenhouse gasses comes from transportation, so if we could be having greener transportation and alternative energy, we could do a lot to reduce greenhouse gasses.

State Representative Brett Hulsey said there’s also an economic upside to green transportation. “Every $50,000 we don’t send out of the state for oil, gas or coal, we create a job here,” said the Madison Democrat, adding that Wisconsin annually sends about $12 billion out of state for gasoline and other energy sources, while green energy offers the potential for job creation within the state.