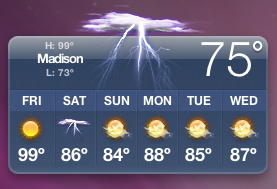 A hot couple of days are in store for a big portion of the upper Midwest over the holiday weekend. Tod Pritchard with Wisconsin Emergency Management says it’s not just uncomfortable; it’s also dangerous. “In 1995 we had154 heat-related deaths and over 300 heat-related illnesses.”

Summer heat waves are the biggest weather-related killers in Wisconsin, far exceeding tornadoes and severe storms, according to the National Weather Service, which says today’s temperatures are expected to be in the upper 80s to mid 90s. When factoring the air temperature with the humidity, the heat index could be as high as 105- to-110. (Tips to keep safe-pdf)

Pritchard acknowledges that staying in an air-conditioned room might not be easy during the Independence Day weekend that has most of us outdoors. “Make sure that you’re listening to your body and if it’s telling you it’s under stress, you know, take a few minutes, even to just slow down a little bit; cool off; relax for a little while; drink some liquids; keep hydrated.”

He says don’t push yourself to cram a lot of activity into your weekend. Pritchard says in addition to drinking a lot of water, it’s a good idea to avoid liquids with caffeine and alcohol, which make it more difficult to regulate body temperate. Also, he suggests you avoid heavy meals. And never leave anyone, or any pet, in a car.