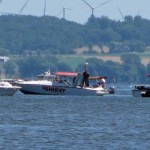 Two bodies were recovered from Lake Winnebago after a plane crashed about a quarter mile off the western shoreline around noon Monday. Fond du Lac County Chief Deputy Sheriff Mark Strand says one person was flown from the scene by Flight for Life and the other was taken to the Medical Examiner’s office. A woman’s body was recovered first and then sometime later a man’s. Strand didn’t say whether the aircraft was related to this week’s AirVenture in Oshkosh, but that typically there are crashes around EAA time.

Scott Klein owns Wendt’s Marine in Van Dyne. He was working when a neighbor told him about the crash. He grabbed a pair of binoculars and saw a fishing boat out near the scene. He took his pontoon boat to see what he could do. Klein went back to shore and ended up giving a Winnebago County Sheriff’s deputy a ride out to the crash site. The neighbor who told him about the crash, Robert Abraham, heard the sound of an airplane engine sputtering and managed to catch the tail end of the crash through his telescope.

It’s the first fatal plane crash connected with EAA worked by the Fond du Lac County Sheriff’s Department since a 67-year-old Fennimore man crashed his plane in a farm field in July of 2005. The National Transportation Safety Board has taken over the investigation.

UPDATE: The names of the two people killed in Monday’s plane crash on Lake Winnebago have been released. The pilot was 47-year-old Steven Staples of Makanda, Illinois and his passenger was 36-year-old Michelle Palermo of Kimberly, Wisconsin. National Transportation Safety Board, Investigator in Charge Pamela Sullivan says it will take several months before the report on the investigation into the cause of the crash becomes official.  The two were attending this week’s EAA AirVenture fly-in and convention in Oshkosh.