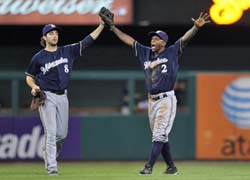 Milwaukee Brewers on top and Yuniesky Betancourt added an insurance run with a sacrifice fly and Milwaukee went on to beat the St. Louis Cardinals 5-3 in the first of a 3-game series in St. Louis.

The win is the Brewers 12th in the last 13 games and they enjoy a 4-game lead on the Cardinals in the Central Division race.

John Axford came on to record his 30th straight save and 33rd overall.

Corey Hart returned to the lineup for the Brewers and gave the Brewers a 2-0 lead with a 2-run homer in the 3rd, extending his hitting streak to 9-games.