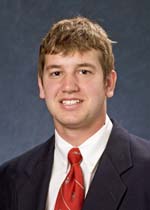 quarterback has suffered a setback.

Budmayr practiced on Wednesday but didn’t throw because of pain in his sore right elbow.  Budmayr started experiencing pain on Tuesday.

Budmayr finished the spring as the Badgers top rated quarterback, but that was before the arrival of Russell Wilson.  Wilson has out-performed Budmayr during the first week of training camp.

With Budmayr shutting it down for now, redshirt freshman Joe Brennan will get reps behind Russell Wilson.