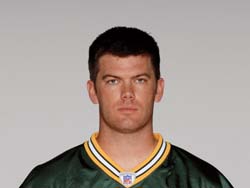 camp on Wednesday night.  They’ll use tonight’s padded workout to prepare for their preseason opener against the Cleveland Browns.

TE Jermichael Finley sat out practice on Wednesday with a glute injury, but the coach said he’s not ruling Finley out of Saturday’s game at Cleveland just yet.  McCarthy said playing time decisions will be laid out today.

Kicker Mason Crosby got some kicking work in on Wednesday night, his first activity since suffering a sprained ankle last Friday.  Crosby will kick again during tonight’s practice and then the Packers will evaluate him on Friday to decide if he’ll kick against the Cleveland Browns on Saturday night.

Mike McCarthy said the teams I.R. players (Mike Neal, Ryan Grant, Jermichael Finley) have all performed well in training camp to date.  The Packers coach said all three are ready to play in games, although all three will have to clear that mental hurdle.

The Packers will visit the White House tomorrow and face the Browns in Cleveland on Saturday.