You are here: Home / Politics / Govt / Secretary of State defends his office 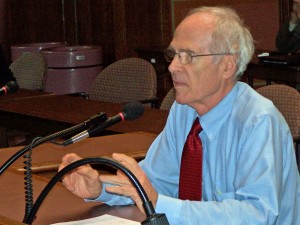 Wisconsin Secretary of State Doug La Follette says a proposal to close his office and the State Treasurer’s is not needed. Both would be eliminated under a proposed state Constitutional amendment currently being considered by lawmakers.

State Treasurer Kurt Schuller introduced the proposal after he campaigned on the issue last fall. Schuller says the offices are no longer needed in the state because they have become unnecessary over time, as their budgets have been cut and duties shifted to other state agencies. Schuller says their remaining duties could easily handled by other areas of state government.

The bill received a hearing at the Capitol Thursday, with Secretary of State La Follette defending the office he’s served in for over 20 years. La Follette says the answer is not to shut down a branch of government, but to begin returning its power.

La Follette says no other state with a Secretary of State has eliminated the position. He also feels that Wisconsin needs to get back to being more consistent with where some duties are located.

During testimony, La Follette repeatedly went after the Department of Financial Institutions, which he says has taken over many of the duties businesses expect to be in his office. The Secretary says his office repeatedly has to direct people to DFI for services, such as incorporating in the state of Wisconsin.

To some extent, Schuller agrees that the offices need to be given back many of their duties. However, he says that should only be the goal if voters were to reject the proposed amendment to eliminate the offices.

If approved by the Legislature this session, the amendment would need to pass again during the next session before being sent to voters in a statewide referendum.