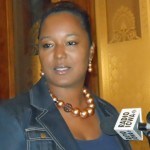 A state senator from Wisconsin is urging Iowa Democrats to “get off the couch” and prepare to fight union-busting legislation similar to what is now law in Wisconsin. State Senator Lena Taylor, a Democrat from Milwaukee, was among the Wisconsin lawmakers who retreated to Illinois to try to block that bill from becoming law. “The reason that I’ve come is to really say to you, like Paul Revere kind of, you know, said, ‘The British are coming!’ I’m saying, ‘The Republicans are radical! The Republicans are radical!” Taylor said Tuesday afternoon in Des Moines. “And they’re coming to a place and a town near you.” Taylor spoke at a statehouse news conference organized by central Iowa Democrats.

State Representative Bruce Hunter, a Democrat from Des Moines, used the word “inspirational” to describe the Wisconsin Democrats’ fight — and their flight to Illinois. “We would have invited them over to Iowa, but they never asked,” Hunter joked. Iowa’s Republican governor and the Republican-led Iowa House tried to pass changes in Iowa’s collective bargaining law this spring, but Democrats hold 26 of the 50 seats in the Iowa Senate and with that majority in the state senate, Democrats blocked the bill.

Taylor, the Democrat from Milwaukee, suggests the story “is pretty much the same” in a host of other states. “And so I’m coming to Iowa today to say, ‘Listen, if we want our children and your grandchildren and their grandchildren to have access to the American dream that I stand on, then we’re going to need to stand up and fight back and say that enough is enough,'” Taylor said.

Taylor was the main draw for a Tuesday evening fundraiser for Polk County Democrats, part of what she describes as a nationwide speaking tour. “I have to tell you as a mother, a single parent at that, of an 11-year-old, it’s a lot,” Taylor said, with a laugh. “It’s a lot going on, but this is our moment and there is no question that we have to seize this moment and we have to engage people now.”