You are here: Home / Brewers / Carpenter shuts down Brewers

The St. Louis Cardinals are extreme longshots to overtake the Milwaukee Brewers in the NL Central, but they’re not going down without a 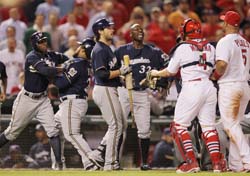 Chris Carpenter tossed a 4-hit shutout as the Cardinals blanked the Brewers 2-0 at Busch Stadium in St. Louis yesterday.

Rafael Furcal provided the offense for St. Louis with a solo home run.  The win, coupled with Atlanta’s loss to Philadelphia, pulled the Cardinals within 6 1/2 games of Braves for the wildcard lead in the National League.

Carpenter was 1-2 with a 5.68 ERA in three previous starts against the Brewers this season.

The benches emptied in the 9th after Carpenter struck out Nyjer Morgan and Morgan threw his tobacco in Carpenter’s direction.  Morgan was restrained by teammates and eventually ejected.  Carpenter then retired Ryan Braun and Prince Fielder to complete the shutout.

Morgan said Carpenter yelled an expletive at him, which is what caused the problems in the 9th.

The Brewers return to Miller Park tonight to open a 4-game series against the Phillies.  Chris Narveson faces Cole Hammels in the pitching matchup.