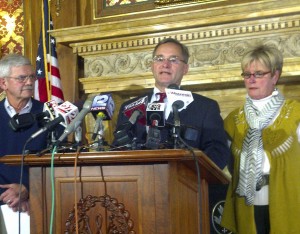 Democrats in the Wisconsin legislature were critical Wednesday, in response to the governor’s jobs session. Governor Scott Walker is proposing an ambitious agenda for a “Back to Work Wisconsin” special session of the legislature. “These are all things that businesses, job creators, people who are ultimately going to put middle class workers back to work, have been asking for,” the governor said in Sun Prairie. Walker said the 26 bills on the special session agenda will help spur job creation in the private sector.

But at a press conference where they reacted to the announcement, Democrats were less than impressed. “It’s nearly October, and we are just getting around to even considering any number of bills, including Democratic bills,” said Senate Minority Leader Mark Miller of Monona. “Unfortunately, it seems just like the previous special session with the so-called budget adjustment bill, this session will be just another example of bait and switch.”

“We join with him, as we did in the previous special session, in advancing bills that accomplish that goal,” said Assembly Minority Leader Peter Barca of Kenosha. “What we do not want though, is a special session to rush bills that are just payoffs to special interests.” Some of the bills are authored by Democrats, and Walker said he expected support from that quarter. “My guess is, just like we saw in our special session on jobs in January, you’re going to see a significant number of Democrats voting for most if not all of these pieces of legislation,” the governor said.

“It’s very clear that Democrats are going to have a hard time with some of these bills,” countered Barca. “It seems to talk a lot of nerve to propose this agenda, that is loaded with special interest giveaways,” said Assistant Minority Leader Donna Seidel of Wausau.

Lawmakers are scheduled to be back next month for their regular session. Walker said he wants the special session taken up during that time, with work wrapping up by the first week of November.