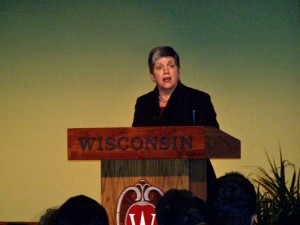 The Secretary of the U.S. Department of Homeland Security made a stop in Madison Friday to unveil a new program aimed at making it easier for international students to come to America. Speaking on the University of Wisconsin-Madison campus, DHS Secretary Janet Napolitano says the nation has a strong interest in attracting academics from around the world because of the economic, educational, and cultural benefits they have to offer.

Napolitano says Homeland Security is launching a new online resource that will make it easier for students who want to study here. The “Study in the States” initiative is designed to coordinate necessary information those students need in applying for visas and navigating the other hurdles they face when trying to apply to U.S. institutions.

Napolitano says the effort is also aimed at streamlining the process for international students trying to apply to study in this country.

Over 4,000 international students are currently enrolled at the UW-Madison, with over a million on campuses across the country.