You are here: Home / Sports / Mallards named NWL Organization of the Year

The Madison Mallards and their general manager Conor Caloia  swept the 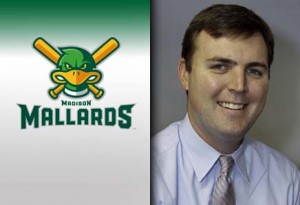 The Mallards set new attendance records in 2011, drawing more fans to their games at Warner Park than any other Summer Collegiate Baseball team ever has.  In fact, while shattering their own attendance highs both in total (213,467) and per-game average (6,278), the Mallards out-drew 85% of affiliated Minor League Baseball teams each night and 100% of independent minor league teams.

Warner Park, known to many as “The Duck Pond”, went through a $1.8-million renovation prior to the 2011 season.

Caloia is completing his second year as the general manager of the Mallards.