You are here: Home / Packers / Packers need to run the ball more

In the first half of Sunday’s 30-23 Green Bay win over Carolina, the Packers top 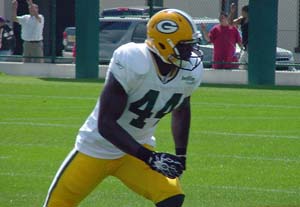 In the second half, things picked up.  On the first drive of the second half, Starks had rushes of 8, 1 and 14 yards and it eventually led to big play action touchdown passes, 49 yards to Greg Jennings and 84 yards to Jordy Nelson.

Starks finished with 85 yards on 9 carries, good for a 9.4 yards per carry average.  Starks came on strong late last season and said he feels even better this year.

The Packers finished with 124 net rushing yards on 21 carries, good for a 5.9 yard average.  Certainly, the number of offensive plays were down.  The Packers had 52 total plays, which is part of the reason why their rushing total is based on 21 total carries.  But it’s even clear to quarterback Aaron Rodgers, James Starks and Ryan Grant ran it well and deserve more opportunities.

James Starks has a total of 142 yards on 21 carries in two games this season.