You are here: Home / Packers / Packers off to a good start

The Green Bay Packers came out firing from the start tonight, taking the opening drive 76 yards on 9 plays for the game’s opening 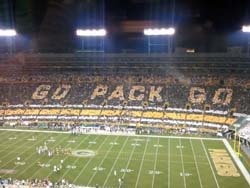 touchdown.  Aaron Rodgers found Greg Jennings off of his back shoulder, a play that has become a favorite for Rodgers and has worked continually.

Rodgers also has touchdown passes to Jordy Nelson and rookie Randall Cobb (32 yards) in the first half.  The Packers fourth first half touchdown was a 17 yard run by James Starks.

Earlier in the day, the NFL treated Packers’ fans to a pregame concert and the celebration has continued inside the stadium.  Packers’ fans are loud and they have plenty to cheer about.

They’ll take a 28-17 lead over the Saints into the locker room at halftime.