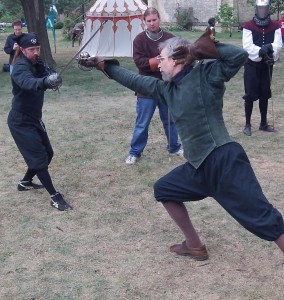 People from around the world descend upon Racine for the four day Western Martial Arts Workshop. The bi-annual  event, which concluded Saturday, drew enthusiasts and practioners of historical combat arts originating in Europe and America.

The 19th century architecture of the DeKoven Center was a fitting place for the breakout groups with some wearing full suits of armor while others donned fencing attire or gym gear.

Among the older arts being practiced is German Sword and Buckler, a style resurrected from a 13th century text. “In this case it’s the oldest surviving treatise,” says instructor Roland Warzecha.

The German native says such a reconstruction process involves determining why and for whom the text was written. The next step involves utilizing the same weaponry with existing knowledge of body mechanics.

He adds there is a popular misconception that European swordsmen did not possess as efficient and refined techniques as Asian counterparts like the Samurai.

The western combat arts have become increasingly popular in Europe and America. Warzecha says this is because people are drawn to martial arts in which they share a cultural heritage.