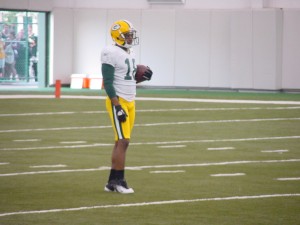 history.  He shares the honor with Ellis Hobbs, who returned a kickoff for a touchdown for the New England Patriots against the New York Jets, Sept. 9, 2007.

The last time the Packers returned a kickoff for a touchdown was Allen Rossum’s 92 yard return for a score on Nov. 19, 2000.

Cobb is the Packers second round draft pick out of Kentucky this season.