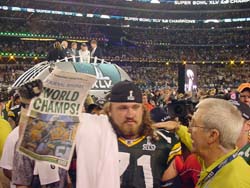 The team’s website, Packers.com first reported the news.  Sitton was in the final year of his original rookie contract and would have been an unrestricted free agent at the end of the season.  Terms of his new deal weren’t made available.

Sitton was a 4th round pick out of Central Florida in 2008 and became a full-time starter in his second season.  He’s the only Packers’ starter that hasn’t missed a snap over the last two seasons.

In 2010, Sitton was named the NFL Alumni Association’s offensive lineman of the year, even though he didn’t make the Pro Bowl.

Tight end Jermichael Finley is also an unrestricted free agent at the end of the season and is likely next to get an extended deal from the Packers.