This was the scene earlier this morning at Soldier Field in Chicago.  A heavy 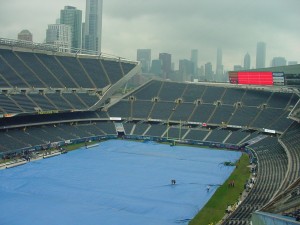 shower came through but the Bears had the field covered.  The tarp is now coming off, about 1 1/2 hours before kickoff between the Green Bay Packers and Chicago Bears.

The Packers, despite having the worst passing defense in the NFL after two games, they’re off to a 2-0 start, tied with the Lions going into their division opener today.

The Bears struggled in a loss to the Saints last week and are seeking balance in their offense.  Offensive coordinator Mike Martz was under fire this week after the Bears threw the ball 52 times and ran it just 11.  QB Jay Cutler was sacked 6 times and hit 16 more times.

The Packers defense will have to play without safety Nick Collins for the rest of the season, replaced by Charlie Peprah, who took over for an injured Morgan Burnett last season early on.

Who wins?  The Bears are not only disappointed with losing twice to the Packers last January, including a 21-14 setback in the NFC Championship game.  The Bears also are smarting from last week’s loss to the Saints.