You are here: Home / Politics / Govt / Thompson may be too moderate for GOP 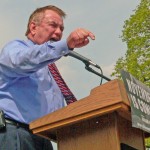 Former Governor Tommy Thompson has moved a step closer to being a candidate for the U.S. Senate — filing the paperwork which will allow him to begin raising money for a U.S. Senate bid. Wisconsin Democrats are already pointing out Thompson’s moderate credentials. Democratic spokesman Graeme Zielinksi questions whether there’s a place for Thompson in today’s GOP. “Tommy Thompson created BadgerCare, it was his train idea that they hated so much,” said Zielinski. “He apparently believed that women’s health rights should be kept to themselves. I think he believed in evolution, too.” And Zielinksi said Thompson’s work as a Washington lobbyist will be a tough sell with voters.

Thompson clearly has a more moderate record than that of the other announced Republican candidate, former congressman Mark Neumman. “I think it is clear that the Republican party has shifted to the right, since 2001 when Governor Thompson was last in office,” said Charles Franklin, a political science professor at UW Madison. “He may have a harder time selling some of the interest groups and activist groups within the party and outside the party, that he really is walking the walk and not just talking the talk, on this new, considerably more conservative Republican party.”

“I don’t know if there’s any room for Tommy Thompson in the modern Republican party that’s been dominated by Paul Ryan and his plan to end Medicare and Scott Walker and his attack on the middle class,” said Zielinksi. “The tea party extremists who run the Republican party are going to attack our nominee for the same things they accuse Tommy of doing.” Madison liberal Tammy Baldwin is so far the only announced Democratic candidate for the seat being vacated by Herb Kohl.